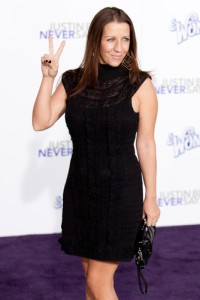 Kathie Lee Gifford and Hoda Kotb were joined by Pattie Mallette, Justin Bieber’s mom, as she discussed her new book, Nowhere But Up, and her visit to The Dream Center. (Photo Works / Shutterstock.com)

Long before teenage girls were crying for Justin Bieber and his music, it was his crying 18 years ago that brought music to his mother’s ears. His rise to fame is very well-known, but you might not know the life journey of his mother. Well, don’t you worry. Pattie Mallette, Justin’s mother, writes about it in her new book, Nowhere But Up: The Story of Justin Bieber’s Mom, and she joined the ladies to talk about it.

Pattie Mallette: Nowhere But Up Review

Kathie Lee said Pattie is on her first book tour and people are fascinated by her story. Pattie said she is hopeful they are going to get something out of it. Hoda said many people know she is a single Mom, but many didn’t know about the sexual abuse and the suicide attempt. Pattie said she is excited to get people’s reactions. She said the few people that have read said it inspired them, which is why she wrote it. She said you don’t have to be stuck in your pain and stories are what helped her. Part of the proceeds from the book will go to women’s centers, which I think is an amazing thing.

She told Justin about this story before writing the book. She said he wrote the foreword, read the book and he has been so supportive. Pattie said it was hard for him to read and it has some painful parts, but he has been really supportive. She said she has an amazing son and you can catch Kathie Lee talking to Justin right here.

Pattie went to The Dream Center and spoke to some women there that were in a similar situation she was growing up. These women did not know she was Justin Bieber’s mom. She said she was there before and wanted to take a tour of it because she was so inspired by it. Matthew Bartnett, the founder, introduced her to everyone as his friend Pattie. Three women told their story and thanked her and they were going to go on their way. Pattie then shared her story and told them she is Justin Bieber’s mom and it wasn’t just about being his Mom, but they saw hope.