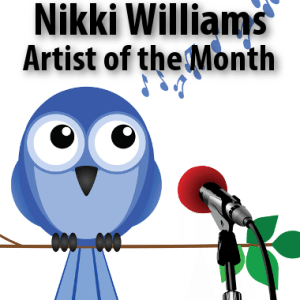 Elvis Duran chose Nikki Williams as the Artist of the Month.

Nikki moved from South Africa to Nashville to pursue her dream of being a musician and Elvis said that her music is just like her, “all over the map.” Nikki’s music crosses genres and on her album, pop, dance, and rock can all be heard. Nikki’s voice is powerful and soulful and Elvis said that he heard her fill a barn with just her voice, no microphone needed.

Nikki Williams’ album has yet to drop, but her music has already been heard worldwide. She in fact wrote a current hit song, “Heart Attack,” sung by Demi Lovato. Nikki said that her favorite genre of music would have to be pop, but she also likes to sing some soul music. “So I can cry while I sing,” she said about soul music.

She listed Alanis Morissette, Janis Joplin, and Etta James as her biggest influences, so we can see where that interest in soul comes from. Nikki performed a mellowed-down rendition of “Glowing,” the single from her upcoming album, for Kathie Lee and Hoda and the audience to much applause.

Elvis mentioned that the version of “Glowing” on the album is “fist-pumping” and Nikki said that there have already been dance remixes made to the song. Look for Nikki’s album coming out this summer.