Kathie Lee Gifford and Hoda Kotb were joined by Len Berman, sportscaster and author of six books, including his newest one titled Greatest Moments In Sports: Upsets and Underdogs, as they took a look back at the London Olympics 2012 highlights and bloopers, including Michael Phelps victories and women gymnastics. 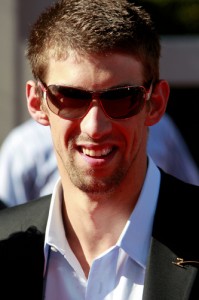 Len Berman took a look back at the London Olympics 2012 highlights and bloopers, including Michael Phelps victories and women gymnastics. (Joe Seer / Shutterstock.com)

Len Berman decided to give out his own medals to the three best highlights from these London Olympics 2012. For the Bronze medal, he gave it to Usain Bolt. He won gold in the 100m, 200m and relay event. This was the second straight Olympics that he won all three events.

For the Silver medal, Len gave it to the women gymnasts. He said Gabby Douglas won the all around gold and as a team, the US Women Gymnastics won team gold and were a big hit in London.

For the Gold medal, Len gave it to Michael Phelps. Len said he won 22 medals while competing in the Olympics and will anyone ever do that again? He won four gold and two silver in the London Olympics 2012. Len said there are over 80 countries in the world that in their entire Olympic history don’t have that many medals.

With any highlight reel, there has to be a blooper reel to go with it. Len Berman shared some of the bloopers that took place at the London Olympics 2012 as well. He showed a Cuban pole vaulter that tied for the lowest jump when his pole broke in half during his jump. Many of us have seen the video of the German weightlifter who dropped the bar during his lift and it fell on his neck. There was also the German diver who did a belly flop during his dive.

Some other moments Len Berman shared was in badminton, the Chinese team intentionally lost some matches so they could get a lower seed in the next round and have an easier matchup while going for the gold medal. They were all disqualified from the London Olympics 2012. Also, Len said that grunting in women’s tennis is always talked about, but he shared clips of the women shot putters who made some loud screams and grunts during their events.