Tracy Beckerman traded in her New York City job as a television producer for the life of a suburban stay-at-home mom, recounting her story in her memoir, Lost in Suburbia. Tracy quit her job to stay home with her son, so she and her husband moved their family to the suburbs in New Jersey. Switching from having a full-time career to being a full-time mom was an identity change that Tracy had not expected. “At the beginning, it was hard to see the humor in it,” she said. “But then you realize how funny kids are.” She and her husband now have two sons; she said they should have named their second son “Oops,” but she has now managed to get her cool back.

Kathie Lee & Hoda: Tracy Beckerman Gets Her Cool Back 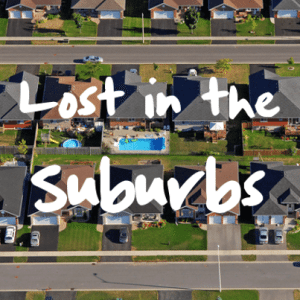 Lost In Suburbia author Tracy Beckerman talked with Kathie Lee about trading in the city for the suburbs.

Tracy said that going from wearing cool clothes and having a job title to being home, “covered in goop,” was a challenge. However, after finding the humor in a life as a stay-at-home mom, she has found her cool again.

She realized that she turned into a person she didn’t want to be, wearing mom jeans and hair scrunchies. She no longer drives a mini-van because she said, “Minivans look like pregnant women,” explaining that when you open the doors and kids jump out, it’s like the van is giving birth.

She said minivans are convenient, but not cool and she wanted to get her cool back. So she updated her wardrobe and got into writing. She wrote Lost in Suburbia, telling stories from her experience at home with her kids. In one anecdote, she told of the time her three-year-old son found her “personal massager” in her bed and had to tell him it was a back massager. She now writes a syndicated column appearing in papers around the country.