She may be best known for her award-winning TV role as Sue Sylvester on Glee, but Jane Lynch actually began her career on stage. With Kathie Lee & Hoda, the actress dished on her return to Broadway in the Tony-nominated revival of Annie. Jane can currently be found on stage eight times a week as the villainous Miss Hannigan. 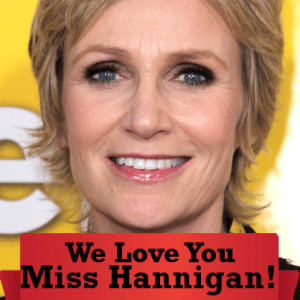 Kathie Lee & Hoda spoke with Jane Lynch about her role on Broadway as Miss Hannigan in the revival of “Annie.” (s_bukley / Shutterstock.com)

“I’m having a blast,” Jane admitted to Kathie Lee & Hoda. While “the jury’s still out” on whether Jane can really sing or not, she sounded pretty fantastic in the audio clip that was shared. Jane revealed that there’s nothing like the feeling of being on stage, especially since she hasn’t done it in about twenty years. “You’re terrified and thrilled at the same time,” she said. “It’s the best feeling in the world.”

Kathie Lee also played Miss Hannigan, so she and Jane bonded over their interpretations of the iconic character. Kathie Lee (fittingly) played Miss Hannigan as a drunk, and incorporated a lot of physical comedy into her performance. While Jane isn’t as physical, she does get cramps in her legs from running around the stage.

In addition to her Broadway role, Jane is also the host of a new NBC show called Hollywood Game Night. The show was inspired by Jane’s friend Sean Hayes, who is notorious for hosting celebrity friends at his house to play games. Jane revealed that many of the questions are based on pop culture, rather than serious trivia knowledge.

Kathie Lee & Hoda decided to turn the tables on Jane and host a trivia game of their own. There was no stumping Jane Lynch, though; the pop culture expert answered all of her questions correctly, identifying celebrities like Elton John, Barbra Streisand, and Paul McCartney. She also knew “Blue Ivy’s mom” (Beyonce) and the star of Cabaret (Liza Minnelli).