Colbie Caillet joined Kathie Lee and Hoda to talk about her new album.

Her first song “Bubbly” remains one of the best-selling tracks ever, and she is now a two-time Grammy winning artist. Colbie has released three studio albums, and she is now releasing the first half of her fourth album called “Gypsy Heart Side A” with the lead track “Try“. 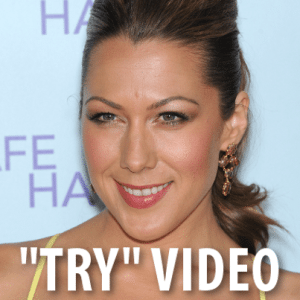 The great news is, “Try” is free all week on iTunes in order to give people the opportunity to hear her song and get it out there.

Colbie Caillat was actually found on MySpace and has come a long way since then. She said she worked on her fourth album for three years and has now released the first half of it in hopes people will get to know the first five songs. She did say, however, that she’s already written and recorded the other songs, she just hasn’t released them yet.

The video for “Try” was inspired by women taking selfies of themselves. She said the whole point of the song is to embrace who you are, wearing minimal or no makeup. She admitted that it was difficult to get people to participate in the video because of how self conscious they were. She said she hopes the video and the song empowers young girls to be more natural.

She also shared that her other album covers were photo-shopped and not as natural, whereas the cover of her new album is not photo shopped at all.

So when will the rest of the album be released? She simply said “soon”.

At the end of the show, Colbie Caillat performed her new song “Try”. Kathie Lee and Hoda shared that at that point her new album was already in the top 10 on the iTunes chart.

She performed barefoot with just a guitarist. The song has a great message, “you don’t have to try so hard”, that is great for men and women of all ages. It sounds like her other songs that she’s released, but the message itself makes it unique.