The Sundance channel’s new show Rectified has been getting rave reviews from critics and Kathie Lee and Hoda know Abigail Spencer is the actress behind the success. They invited her onto the show to talk about her new role and the history she has with Kathie Lee.

The series follows the life of Daniel Holden who was on death row for 19 years before being exonerated for a murder case he never committed. Spencer plays Holden’s sister who worked for years to prove his innocence and get him back home. The first episode of the series, which premieres April 22 2013, follows Holden as he tries to readjust to life outside of prison. The rest of the six episode long series follows Holden in the first couple weeks after being released from prison. 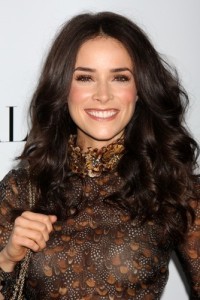 Abigail Spencer stopped by the fourth hour of the Today Show to talk about her role in Rectified and she explained how Kathie Lee is her fairy godmother. (Helga Esteb / Shutterstock.com)

Kathie Lee called the show “raw” while The Daily Beast has called the show the best of the year. Spencer agreed with both, saying she chose to work on the series after she read only a few pages of the script. She said it was the writing that pulled her. She said Ray McKinnon is one of the best writers she has worked with and his talent at bringing the character from the page to screen is amazing.

“I could see how Amantha walks. I could hear Amantha speak,” said Spencer, referring to her character in the series.

This wasn’t the first time Kathie Lee and Abigail Spencer have met. In fact, Spencer might not even be in movies or on television if it wasn’t for Kathie Lee.

Kathie Lee explained that her first love was Spencer’s father, Yancy Spencer. She said he was one of the greatest men she ever knew but he married another woman when they were both younger. He had three children with his wife and when Spencer was 17-years-old she went to see Kathie Lee, who was still friends with her father, in New York City.

While talking on set, Spencer mentioned she was trying to become an actor and Kathie Lee got on her phone right away and got Spencer a audition for All For My Children. She got the part and from that day on Spencer has called Kathie Lee her fairy godmother.