Luckily, Santa was in town to offer his expert feedback on The Today Show holiday trivia game. Kathie Lee Gifford went outside and readied her question cards and microphone for the eager crowd as Santa and Hoda Kotb settled into armchairs inside the studio.

First up: three kids were asked to name all nine of Santa’s reindeer. They got to about six or seven before running into trouble, but Kathie and the rest of the crowd were quick to drop hints and they managed the name all nine. For those following at home, the list reads: Dasher, Dancer, Prancer, Vixen, Comet, Cupid, Donner, Blitzen, and, of course, the obvious Rudolph. Back inside, Santa rattled off all nine and looked every bit the wise old sage before adding a thunderous “ho ho ho.” 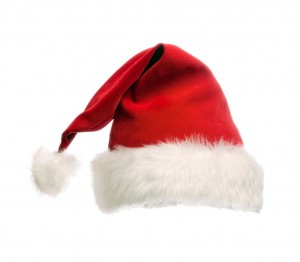 The next questions fooled no one, as everyone in the audience knew the singer caught mommy kissing Santa underneath the mistletoe. Too easy! A few more questions:

Which movie is played the most during the holiday season?

Which of the following companies first used Santa in an advertisement?

New Yorkers first put up a Christmas Tree at the Rockefeller Center in 1931. True or False?

The Answer: True. As a history buff, I felt like I should have known this one – but I had no idea. If your hometown has an interesting Christmas tree story, please share and leave it in the comments.

As it turns out, Kathie has a new Christmas book out. Pretty convenient for the holiday season, I’d say. A crowd of The Today Show family’s kids gathered around the stage to hear a reading of Kathie’s new book, “The Three Gifts: A Story About Three Angels and the Baby Jesus”, by none other than Kathie herself.

The children’s book tells the story of Angels sent by the Lord to deliver gifts, celebrating the birth of Baby Jesus. The very last gift in the collection contains a secret message that rings true to adults and children alike. I won’t ruin the surprise!

Needless to say, about half of the kids were completely zoned out during the reading, but a few were engrossed in the storyline and I could just see their imaginations running wild. Hoda helped out by flipping the pages and showing the kids each illustration throughout the segment.