Kathie Lee and Hoda wanted to send a mother on a cruise for their Mother’s Day edition of their show. For their Most Deserving Mom contest, they read 3000 essays and somehow managed to get it down to two finalists. Both stories were heartbreaking and uplifting, and both contestants and their families were brought to the studio to see if they won the ultimate cruise vacation. 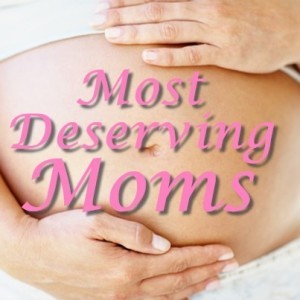 Kristin’s dream of motherhood came true because of her sister.

The first contestant was 45-year-old mom Kate from Connecticut. Her friend Gretchen was the one to nominate her for the contest, and she joined her on set along with Kate’s family. Kate’s story is about her son, Adam, who came down with an ear infection one day. Kate said, “One night we put him to bed and we found him unresponsive.”

That’s when things took a turn for the worst. The ear infection turned out to be bacterial meningitis. He was hospitalized with the deadly disease, and “he had to learn to walk, talk, eat all over again,” said Kate. Kate lived in the hospital with Adam for four months, vigilantly staying by his side. This was of course hard on the rest of her family.

Because of the meningitis, he is permanently blind, he has epilepsy, and he suffered brain damage. Kate poured herself into managing his special needs after this horrific ordeal, making sure he gets the right diet and medications. Not only does she do this for her son, but she’s also working with an organization to build a playground for kids with special needs. Despite the challenges she has faced, she has kept her family thriving, and wishes to positively impact others

The other contestant was Deanne, a 31-year-old mother from Pennsylvania. She was nominated by her sister Kristin, whose dreams of motherhood came true because of Deann. They have always been close, but they became even closer when Deann offered to carry Kristin’s child. Kristin had the tragic misfortune of losing all five of her pregnancies, and was desperate for solutions.

Deann offered to carry Kristin’s child, to be her gestational carrier. Deann was already raising her own two children, but she was happy to help her sister. “I never looked at it as a sacrifice,” she said. The situation is certainly unique and a little unorthodox, but “where he [the baby] comes from is…a place of true love,” said Deann. The reason Kristin nominated her sister for this contest is because, to her, what her sister is doing is “the epitome of unselfishness.”

How could Kathie Lee and Hoda pick just one winner for the grand prize of a seven-day cruise to anywhere in the world? Both stories made the TV show hosts tear up, and perhaps because they were so touched by both stories, Kathie Lee and Hoda surprised everyone by crowning both women as winners of the cruise prize.