Kathie Lee & Hoda: What the What Photos

Sara Haines had some more viewer submitted photos that were really entertaining for Kathie Lee and Hoda’s segment, What the What? The first photo was from the caption contest last week. The photo showed a dog in the shower with a caption that read, “What? Like you never peed in the shower before.”

The next photo was a sign from Universal Studios that read “Child Switch” with an arrow pointing up. No one had any idea what it meant. The third photo was of a sign that had directions for numerous places, even hell. It simply had the word “Hell” printed next to arrow pointing towards the ground.

The fourth photo was of a sign on the back of a truck. The sign read, “If we can’t fix it, we’ll fix it so no one else can.” A final picture was of a sign at Jack’s Liquor Store which read, “Adult Daycare Center.” The picture for next week’s photo caption contest was of a dog and a child with their heads both under a bed. 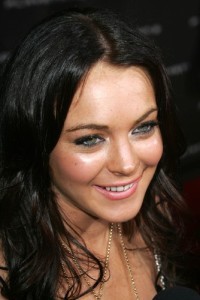 Kathie Lee and Hoda looked at some funny pictures in their What the What? segment and they played Who Knew, looking back at Lindsay Lohan’s career. (s_bukley / Shutterstock.com)

Kathie Lee and Hoda had some money to give out to some trivia winners over at the NBC Experience Store. All the winners who could answer the trivia questions right got $100 while the losers got a Kathie Lee CD. See if you can get some of the questions correct.

Finish the lyrics to the Brady Bunch theme song – Here’s the story of a lovely lady, who was bringing up three very lovely girls.

What are the names of the real life twins who starred in Full House and It Takes Two? – Mary Kate and Ashley Olson.

In which Lindsay Lohan film does the actress play identical twins? – The Parent Trap.

Name of the group of siblings who sang the song “ABC?” – The Jackson 5

Name the brothers who are big time comedians and have starred in Old School and Wedding Crashers – Luke Wilson and Owen Wilson.