The Rock and Roll Hall of Fame is having their 28th annual induction ceremony tomorrow, April 18 2013, and to celebrate Kathie Lee and Hoda had a bunch of music trivia for the audience to try and answer for some prizes.

Check out all the trivia questions below and see how many you can get right.

This group was not only inducted into the Hall of Fame in 1998 but three of the members have also be inducted by themselves. What is the band? – The Beatles. Carlos Greer, a writer for People magazine, said all the members of The Beatles, except for Ringo Starr, have been inducted twice. 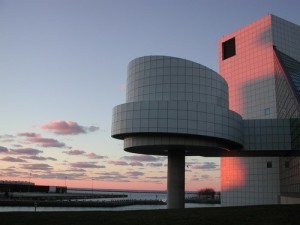 Kathie Lee and Hoda tested their audience’s knowledge of music by asking them questions about the Rock and Roll Hall of Fame Museum which has an induction coming up.

Elvis Presley was one of the first people inducted into the Hall of Fame. Finish the lyrics to “Jailhouse Rock.” – The warden threw a party in the county jail. The prison band was there and they began to wail. The band was jumpin and the joint began to swing. You should’ve heard those knocked out jailbirds sing. Lets rock, everybody, lets rock. Everybody in the whole cell block was dancin to the jailhouse rock.

Name the female artist who has had 19 number one hits between 1975 and 1998 and is being inducted into the Hall of Fame – Donna Summer. Greer said Summer is number two, behind Madonna, for the most number one dance hits.

Name the group that sings “Walk This Way.” – Aerosmith. Greer said before the music video for this song came out, most people had no idea what Aerosmith looked like. After the video aired, they gained fans all over the world.

Where is the Rock and Roll Hall of Fame located? – Cleveland, Ohio. The museum was formed in New York but it eventually moved to Cleveland.

Can you believe the Rolling Stones celebrated their 50th anniversary last year?