Reality Star Week rages on for Wendy Willams, as she welcomes the male cast of Jersey Shore for a look back at their six years of reality stardom and TV infamy. Plus, from the world of professional basketball, Magic Johnson is on the show with an important message. Here’s what’s coming up on Wendy Show August 28. 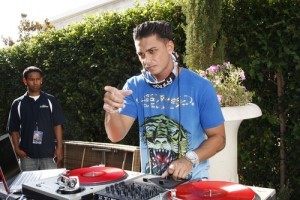 DJ Pauly D is doing well as a DJ since the end of Jersey Shore, raking in $13 million in the past year. He and his friends are on Wendy Williams August 28. (Joe Seer / Shutterstock.com)

From the cast of Jersey Shore, the popular MTV reality saga featuring the gym-tan-laundry trifecta, cast members Pauly D, Ronnie, Vinny, and The Situation are visiting with Wendy Williams to talk about how their reality series made TV history. I would say it definitely paved the way for Honey Boo Boo, but I was never a huge fan of the gang from the shore.

This August 28 encore features the cast’s remembrances of the times they spent together, the memorable moments that made the show such a pop culture sensation, and what the gang had in mind for their futures.

Things are looking up for Pauly D, who once again made the Forbes list of the highest paid DJs for 2013, raking in a huge $13 million payday. But I wonder if he will continue to do so well as his profile fades now that the show has been gone for almost a year.

With resources for in-home HIV testing, knowing your status has never been easier, and Magic Johnson wants everyone at every age to know that resources are available. He has lived a healthy and long life after announcing his diagnosis in the early 1990s, and he continues to be an ambassador for health and education.

To hear more about his message and what he has been working on, be sure to tune in for his conversation with Wendy Williams on August 28 2013. You know she can get serious when the situation warrants, but I bet she will try to bring out Magic Johnson’s fun side as well.