Singer Eve is making her first ever appearance on The Wendy Williams Show, on Thursday, May 16, to promote her new release, Lip Lock. Also on the episode is Life & Style’s Jordi Lippe, who has the latest on the week’s hot gossip. Here’s what you can expect when you hang with Wendy on Thursday. 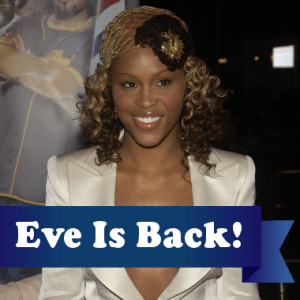 From her first studio album in 11 years, Lip Lock, Eve is making her debut on The Wendy Williams Show May 16. She is ready to get back to her music.

Singer Eve is a Grammy winner who is known for her rap and songwriting talents. Now she is returning to music with her latest album Lip Lock.

For the first time ever, she will be facing off with Wendy on the show. Thursday’s episode is going to be huge for music fans, and it has definitely been a long time coming. Her last studio album was released all the way back in 2002.

Wendy Williams: What Happened To Eve?

Where has Eve been for the past 11 years? She is opening up to Wendy about the latest chapter in her life.

Plus, her visit would not be complete without a performance. Eve is taking over Wendy’s stage with a selection from her new release.

It turns out that Lip Lock was actually in the works as early as 2007, and it has taken this long for record labels and behind the scenes drama to work itself out.

Finally, the long-awaited album is ready for its big debut, and Eve is bringing her project to Wendy for a fun performance.

Who knows what might come up during hot topics? There has been no shortage of pop culture stories this week, from rumors of another Beyonce pregnancy to the story about a woman whose singing caused her flight to make an emergency landing.

From Life & Style, Jordi Lippe is joining Wendy for some delectable Hot Topics and frank talk about the stories you have been seeing on social media.