Home > The Voice > The Voice Auditions
When you buy through our links, we may earn an affiliate commission. As an Amazon Associate we earn from qualifying purchases. Learn more.

The judges are hoping to fill their 12 spots each with amazing singers. There are still many spots open on this season premiere. Team Shakira has Mark Andrew. Team Usher has Jess Kellner and Vedo. Team Blake has the Morgan Twins and Danielle Bradbery. Team Adam is currently just Adam Levine. Adam has been extremely picky, like usual. Maybe this next singer will sway him?

Christian Porter is a 21-year-old bar singer. As a baby, his parents thought he was deaf because he didn’t talk. He began singing before he began talking, he said. He currently sings cover songs for three hours a night. He hopes The Voice will make him a better musician. 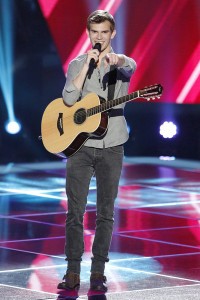 He pulled out a wild card with an acoustic arrangement of “Sexy And I Know It” by LMFAO. Shakira and Blake turned around early, with Usher buzzing in just under the wire. Adam wasn’t ready for this risk taker yet. The women in the crowd were going so crazy that Usher thought Magic Mike was performing. Christian chose to go to Team Blake.

Leah Lewis is a vocal powerhouse at 15. She was adopted from China at eight months and grew up listening to bluegrass. Leah said her father and his country music were a huge influence for her. She said she hoped that Blake or Usher would turn around for her. Carson Daly said that The Voice is made for people like Leah. You would not expect this little Asian tween to be belting out Carrie Underwood like a champ.

That’s just what she did. Leah sang “Blown Away” by Carrie Underwood. It was good, but Adam and the judges kept saying “so close.” No one chose Leah, but they said her potential is off the charts. Adam told her to never give up.

“If you’re 99 percent amazing at 15, you’ve got nothing to worry about,” Adam assured her.