Home > The View > The View Product Reviews
When you buy through our links, we may earn an affiliate commission. As an Amazon Associate we earn from qualifying purchases. Learn more.

Dr Gadget unveiled some of the hottest gadgets for the summer, even though we’re a month away from fall. 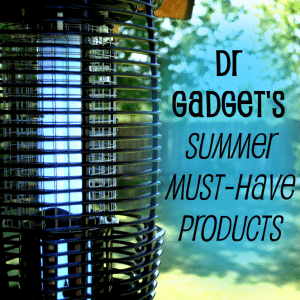 The newest Keurig is the Keurig Mini Plus Brewing System. It’s so tiny that it would fit in a beach bag, as long as you have something to plug it into. They come in the hottest colors and are perfect for a dorm room or RV trip.

The Mission Enduracool Body Towel from Brookstone cooled down a hot and bothered Whoopi Goldberg. You soak the towel in cool water and it holds the moisture in a cooling effect, rather than a dripping or soaking effect. You can put the small towel around your neck, or wear the large towel like a cape.

Just don’t make the moaning sounds Whoopi did, because then Robin Thicke will run away. Poor guy. I’ve never seen someone run away that fast.

Nothing is more annoying than bugs in the summer. They carrying infections, illnesses, and are just plain obnoxious. The Dynatrap DT1100 will not kill the bugs, but trap them. A UV bulb attracts the bugs, while a fan inside puts out dioxide which attracts the bugs. The bugs are sucked in and you just dump the bugs out.

In a sale from Emerson, their action cam is on special for $49.99. You can strap it on to a helmet for bike or blading, beaching or kayaking. Robin Thicke looked ready to shoot a new “Blurred Lines” video in it. The camera is water proof and has a screen on the back so you can see what you’re filming if you want.

In another special, the Cuisinart portable gas grill is totally tabletop ready for the beach or park. Cook burgers and kebobs whenever, wherever.

To get these deals, go to 1 Sale a Day.com to get free shipping.