The View has a great episode June 25, 2014, with actresses Tori Spelling and Jennie Garth coming by to talk about their new ABC Family show Mystery Girls and a performance by New Edition. 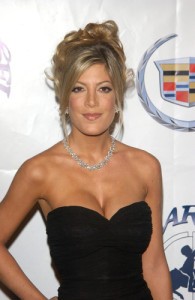 Tori Spelling and her former Beverly Hills 90210 costar Jennie Garth are coming on The View June 25, 2014 to talk about their new show Mystery Girls. (Featureflash / Shutterstock.com)

Tori Spelling and Jennie Garth are, of course, most famous for being on Beverly Hills, 90210, but they’re reuniting for the ABC Family series Mystery Girls, about two former TV detectives who team up to solve a real-life mystery.

It’s a pretty big flashback to see the two onscreen together for anyone who loved the famous teen drama that launched half a dozen sparkling careers while simultaneously giving several of the young stars a career peak. I’m not saying that necessarily applies to Tori Spelling and Jennie Garth, I’m just saying the last time I can remember seeing Tori Spelling in anything was when she appeared onscreen as herself for approximately one minute of film in Scream 2.

But maybe that’s part of what will make Mystery Girls great. After all, it is about two former TV stars. Jennie Garth and Tori Spelling certainly know those parts well. We’ll have to see about the show on June 25, 2014, when the stars reveal some great info about the new show!

Apparently The View’s episode is a full throwback to the times of yesteryear, because R&B and pop group New Edition are performing on The View’s stage. You know New Edition from such extremely dated hits as “Candy Girl” and “Cool It Now“, which both feature a very funky bass synthesizer and vocals from several little kids. New Edition paved the way for future boy bands, like Boys II Men, New Kids On The Block, Backstreet Boys, and N’Sync.

Now the boys of New Edition are all grown up and they’re coming by The View to promote their new “All Six Tour,” featuring all six of the members of the band over the span of their career. Is watching New Edition when they’re all in their 40s as entertaining as when they were in their teens? I’ll leave that up for you to decide, but for younger readers, I have to wonder if it’ll be as entertaining watching the Biebs or One Direction perform their songs when they’re 46.