The View has a great episode July 1, 2014, with guest co-host Ross Mathews stopping by, Joan Rivers coming by to talk about Diary of a Mad Diva, Cee Lo Green discussing his new movie Begin Again, and Molly Bloom coming by to discuss her book Molly’s Game. 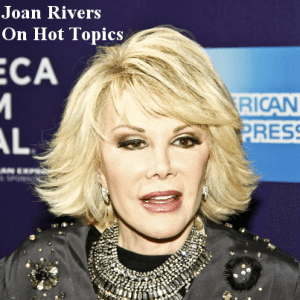 Legendary comedian Joan Rivers will come by The View today to talk about her new book Diary of a Mad Diva. (Sam Aronov / Shutterstock.com)

Ross Mathews is the host of Hello, Ross, and he’s coming by to guest co-host on The View. With all kinds of rumors flying about the new direction of The View next season, after the departure of Sherri Shepherd and Jenny McCarthy from the show (leaving only Whoopi Goldberg behind), Ross Mathews’ name is one of the many people keep mentioning for new permanent co-hosts. I think it’s a brilliant idea. Ross Mathews is hilarious and has shown himself to be a good co-host when it comes to interviewing people and product segments, if a bit meek in the hot topics section. We’ll have to see how he does July 1!

The View: Joan Rivers Diary of a Mad Diva

Legendary comedian Joan Rivers is coming by The View to talk about her new book Diary of a Mad Diva July 1, 2014. Check her out on the show!

Begin Again, the new music-inspired film by Once director John Carney, has a wonderful cast, with a number of people doing things they’ve never done before. Lead Keira Knightly is singing and playing music in the movie, a first for her, and musicians Adam Levine and Cee Lo Green are making their first film with this movie. We’ll have to see what the hilarious Cee Lo Green has to say about the new movie on The View!