Tomorrow is “Guy Day Friday” on The View, with Steve Schirripa and Bob Saget both coming in to co-host. In a new segment premiering tomorrow called “Barbara Learns To…” Barbara will learn how to golf with 2012 PGA National Teacher of the Year, Michael Breed. To cap it off, Whoopi will take on fellow self-professed potato chip afficianado Steve Schirripa to see wh0 will come out on top and be dubbed “The View’s Potato Chip Champion.” 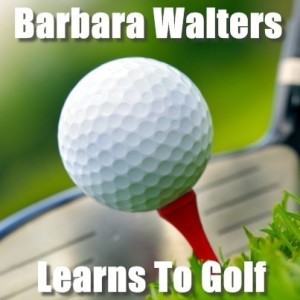 Barbara Walters will learn the game of golf from professional golfer Michael Breed.

The View: Barbara Learns To Golf With Michael Breed

Watching Barbara Walters use a duck call for the first time was pretty entertaining, and perhaps she tried it out to warm herself up for this new segment, “Barbara Learns To…” Taking on golf for the first segment makes a lot of sense, given the timing. It’s “Guy Day Friday,” and golf is one of the most cliche things that a guy can like, amiright? Staying true to the theme, Barbara will be learning how to golf from a guy. It all fits, you see.

This guy, however, happens to have some fame behind his name. As the Director of Instruction at the Michael Breed Golf Academy, Michael has been dubbed “Teacher of the Year” by the PGA, and with good reason. It just so happens that Michael Breed is a, wait for it, professional golfer! I think Barbara is in good hands here. Root for her, Recapo!

Though watching Barbara golf should be interesting, it’s got nothing on a potato chip competition. What the competition will entail exactly is beyond me, but as a person who looks at Doritos and Lays as only one or two clicks south of an illegal substance, I will be watching this one pretty closely.

I wonder what kind of potato chips they will use? The ridge-ridden Ruffles? The curvy Pringles crisp? Or will they go with the traditional Lays? Maybe it will be all three. We”ll just have to be patient and tune in tomorrow to see.