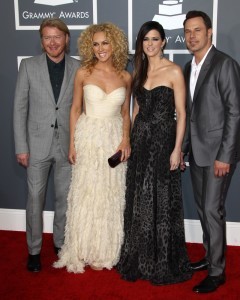 Little Big Town will be performing on The View June 19 2013. (Helga Esteb / Shutterstock.com)

By 2002, the group had released their eponymous debut album. After that failed to produce any major charting singles, they left the independent label the album was released under and signed on with Equity Music Group in 2005, under which they released The Road To Here and A Place To Land.

Once again, Little Big Town left their label and signed to Capitol Nashville, and have released their two most successful albums under them since – The Reason Why and Tornado, with the latter producing the quartet’s first number-one single, “Pontoon.”

Susan Lucci, known best for her work on All My Children, has found a home on a new television series entitled Devious Maids. Based off of a Spanish television show named Ellas son la Alegría del Hogar, this comedy-drama series is about four Latina maids working in the homes of some of Beverly Hills’ most wealthy and powerful residents.