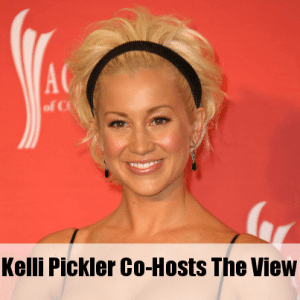 The View June 20 2013 are talking with Kelli Pickler about her Dancing With the Stars win, she performs her new single and Mireille Enos in The Killing.
(s_bukley / Shutterstock.com)

She won Dancing With the Stars and now she is co-hosting The View. Is there anything Kelli Pickler is not good at? While on The View, she is going to be discussing how she felt winning the Mirror Ball Trophy, what it took for her to learn to dance so well and if she would ever be on the show again.

The View are also giving Pickler the stage to do what she does best, perform. I don’t know if she is going to be showing off some of her dancing skills or if she is grabbing the microphone instead, but either way it should be a treat to see.

Most likely, she will be performing her new single with independent label Black River Entertainment. Her newest single is titled “Someone Somewhere Tonight.”

The View are also inviting Mireille Enos on the show to talk about her role in World War Z and her role in the smash hit TV show, The Killing.

In World War Z, Enos is playing the role of Karen Lane, Gerry Lane’s wife, who is left at home as her husband travels the world trying to find a cure for the zombie apocalypse that is tearing the world to pieces.

She is also going to be talking about her role in The Killing, which premiered it’s third season June 2 2013 with a two hour long premiere. She plays the role of lead detective Sarah Linden, a Seattle detective who is given the task of solving the murder of a local teenager. In the newest season, her character is called back out of retirement after a string of new evidence bring new life to her dead cases.

Make sure to tune into The View June 18 2013 to see two great interviews and an excellent performance by Kelli Pickler. If you miss any part of the episode, stop back at Recapo for a recap of the show.