New Edition came by The View to perform a medley of some of their biggest hits, including “Candy Girl,” “Mr. Telephone Man,” and “If It Isn’t Love.”  “Candy Girl” is an R&B and pop classic. It was not just bizarre, but super bizarre to see the men of New Edition perform it in 2014 on The View this morning, now that they’re in their 40s and have much deeper voices than they did for the original recording. Nevertheless, even if the sound was a little deeper and different, the men of New Edition still have it. They performed it with the same passion as ever. 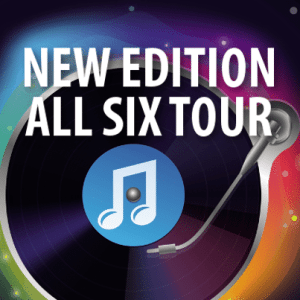 The View had New Edition perform a medley of their biggest pop hits on the show today, including “Candy Girl”, “Mr. Telephone Man”, and “If It Isn’t Love.” (venimo / Shutterstock.com)

One thing’s for sure, the years have done nothing to New Edition’s ability to synchronize their dancing, although the movements are probably a little less smooth and fast than they used to be. Still, New Edition brought their A game to The View stage, as “Candy Girl” turned into “Mr. Telephone Man” and finally, into “If It Isn’t Love.”

Sherri Shepherd had something close to a religious experience interviewing the guys of New Edition. She must’ve been a huge fan when she was a kid! The interview was really chaotic with all of the men trying to answer questions at once and the ladies in the audience shouting things.

Sherri said that the members of New Edition has been wowing fans for 30 years, whether in solo careers or with other groups, and Sherri wondered why they all kept coming back to New Edition. Everyone kept talking at once. But the gist of what was said is that New Edition started their careers and it’s the reason they have careers.

New Edition is about to start the All Six Tour this summer. Sherri wondered how they could still do their moves after all these years. Again, everyone talked at once, but two specific things mentioned was motor oil and BenGay. Ronnie Devoe finally took control and said that they have a genuine love for what they do.

Sherri asked why they thought they hadn’t broken up like other long-running acts. Someone from the audience shouted “love and respect,” and the men of New Edition agreed. Ralph Tresyant said that another key thing was that no one put them together when they were kids. They put themselves together and worked hard at what they did, which is why they still love it to this day. He said that they really care about each other as people.

Bobby Brown even has his own barbecue sauce. He said it’s coming out in July and all you have to do to find it is go to bobbybrownfoods.com.