Country superstar Miranda Lambert came by The View to perform and to promote her new album Platinum. Miranda Lambert said the new album is about turning over a new leaf. She said that in the music industry, they think of it as an album sales number. “But to me, it’s like hair color and diamonds and being a little over the top and being okay with it,” she said. 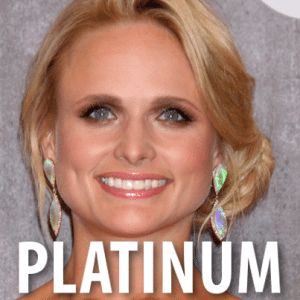 Miranda Lambert just turned 30 and Star Jones, the guest co-host, asked her what she would say to her 20-year-old self. “I’d need to sit myself down,” she joked. She said turning 30 inspired this record a lot. She started writing for her first album at 19 or 20, and so writing for this album was a lot different. She said she’s learned a lot since then.

Miranda Lambert recently lost 25 pounds and she said it was really hard, especially since they had donuts backstage. She said to lose the weight, she had to break up with Cheetos. She also said everyone asks her if she gave up drinking and she said she didn’t. She said giving up food and drinking isn’t much of a life.

Besides her new album, Miranda Lambert is also keeping busy with going on tour, starting a shoe line, running her two boutiques, and opening a bed and breakfast. She said her music inspired her to do other things.

Miranda Lambert said that her relationship with Blake Shelton is so successful because they live in Oklahoma. When they’re done working in New York, Los Angeles, or Nashville, they go home and get away from the limelight and live normal lives. She said they also plan date nights. They drive down the back roads a lot or watch a movie.

Miranda Lambert performed her song “Automatic” on The View after the interview and it was an electric performance. Miranda Lambert really did a good job of not just performing her song, but really emoting it. I think that’s a crucial part of country music, especially live.

For some reason, Miranda Lambert had a huge band on stage with her, including four guitarists. Which is about two too many guitarists. Still, it all sounded really cool together. Miranda Lambert is one of the foremost country stars and it’s obvious from this performance why.