I’ve never listened to any of the man’s music before, but I have to say that seeing him cover Leonard Cohen’s “Tower of Song” was stupendous. Far and away from his extravagant pop productions of years past, Tom Jones’ deep baritone was a perfect match for Cohen’s introspective lyrics on past stardom and relationships, which backed by a very minimal guitar and occasional drums to play off his more challenging vocal flourishes. 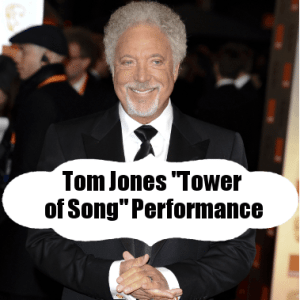 Similar to and totally different from Scott Walker’s avante garde late career curve balls, I have to say that this was not what I was expecting from the same man that was belting out lyrics like “She’s a lady! Whoa, whoa, whoa she’s a lady” earlier in his career. It appears as though the man has acknowledged that he doesn’t have a place in pop music anymore and has aged all the more gracefully because of it.

Tom Jones was at the height of his popularity in the 1960’s and ’70s with songs like “She’s a Lady” and “Delilah.” He got his start at age 24 when he came to perform on Dick Clark. Since then, his days of pop super stardom have long faded, but he still releases music on a regular basis. His latest album, Spirit In the Room, came out last year, and the singer came on The View today to perform “Tower of Song,” the first track off the album.

The first thing that he wanted to do with Spirit In the Room was cover some songs by songwriters he really liked. He spent time listening to music from other songwriters like Paul McCartney and Leonard Cohen. Judging by his performance today, I would say that it turned out okay.