The View: Newsies The Musical On Broadway

Newsies the Musical is a Tony Award-Winning musical produced by the Disney Theatrical Group. It’s the story of the Newsboys Strike of 1899 in New York. The musical is high energy, with moving sets and a lot jumps and dancing. It was based on the 1992 film Newsies, staring Christian Bale and Bill Pullman. It is currently at the Nederlander Theater.

The View: Sherri Shepherd in Newsies 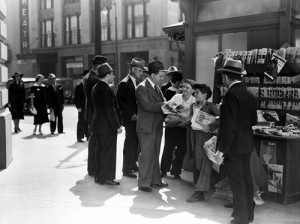 Newsies: The Musical is based on the Newsboys Strike of 1899.

Sherri got the chance to guest star in Newsies The Musical. She had two roles: a singing nun and a wealthy woman.

For the role of the nun, Sherri had to sing and had a line. She prepared for the role in front of the camera trying out her line, “When are we going to see you in church?,” in both serious and sassy voices. Of course she went with sassy. She practiced with the other three nuns, but was still concerned about singing live.

As the wealthy woman, Sherri was going to walk on and buy a newspaper from a young boy with a cough. She was fitted for a beautiful dress and the acting on stage proved to be harder than she anticipated. She was used to television and movie acting, but on stage you have to have bigger movements.

The View: Sherri Shepherd On Broadway

Sherri’s big debut was met with applause. He nun role went off well. She was concerned about the set spinning. The sets in Newsies are large and move and spin to accomodate the scenes. She has to walk up the spinning platform to sing her part, but it went well. The wealthy woman part could have been acted bigger, but she did a good job.

Sherri said that she had a great time doing the part and being in Newsies. Newsies is currently on Broadway and you can buy tickets.