Mario Cantone is a hysterically funny stand-up comedian, actor and writer. Much of Mario’s humor is inspired by his own life, and the subjects of his stand-up routines are often his Italian-American heritage and the fact that he’s gay. You’ll remember Mario from his memorable role as Charlotte York’s friend and stylist, Anthony Marentino, on Sex and the City.

He is also a frequent guest of The View, and often leaves the co-hosts in stitches thanks to his outrageous routines, impressions, and points of view. In celebration of the upcoming Christmas holiday, Mario joined the ladies of The View – and guest co-host Chris Cuomo – for a special holiday performance. As usual, Mario had the whole audience laughing along. 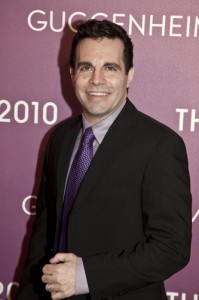 Joy introduced Mario’s act as “A Very Cantone Christmas.” Within the first minute, Mario had already insulted New Jersey governor Chris Christie and New York mayor Michael Bloomberg. He then performed his hilarious impressions of singers Mariah Carey, Liza Minnelli and Judy Garland. He also does a great Theresa Caputo. As they say, imitation is the sincerest form of flattery!

Mario Cantone: “I’ve Got My Love to Keep Me Warm”

In his Judy Garland voice, Mario finally exclaimed, “let’s do this holiday song before the Mayan Apocalypse hits!” With a full live band backing him, Mario performed the Christmas classic “I’ve Got My Love to Keep Me Warm.” The popular Irving Berlin holiday tune suits Mario very well, although I definitely wouldn’t say that his was a subtle rendition.

You could actually hear the audience laughing out loud all throughout Mario’s entire performance. No matter what he does, Mario is always funny. Could “A Very Cantone Christmas” become a new holiday television special? Why not!?