In another Real Life Hot Topics segment, the ladies of The View had a chance to converse with a woman who is making headlines over her prenup. Elizabeth Petrakis’s claim that she signed a prenuptial agreement under false pretenses could send shockwaves that change the shape of marriage and divorce in America. 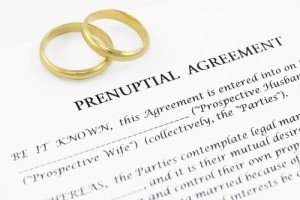 The View spoke with Elizabeth Petrakis, a woman at the center of a landmark decision that could change the consequences of a prenuptial agreement.

Elizabeth married Peter at age 24 in 1998. A month before the wedding, she said her husband forced a prenup on her.

The terms of her prenup were very one-sided, according to Petrakis. She was entitled to $25,000 per year in the event of a divorce. How was she able to convince a judge to throw out her contract with her husband?

She said she had to prove that her husband defrauded her in the prenuptial agreement, which he promised to destroy if they had children together; they ended up having three kids, but the prenup was still in place.

Elizabeth explained that she had to prove her husband never intended to fulfill the promise he made, and it took seven years in court to make her point.

The couple’s net worth is $20-30 million, which means that Elizabeth stands to gain a very secure lifestyle for her children. She claimed that her marriage was supposed to be based on trust, and she was out to prove a point, not cash in for a big payday.

Petrakis said she plans to start a business to help other people empower and protect themselves. The couple’s relationship deteriorated between 2002-2006, and the prenup was a bone of contention throughout the process.

The View: Are Prenuptial Agreements Valid?

As the couple’s trust eroded, Sherri Shepherd noted that “you guys spent more time in court arguing than you guys were married and happy.”

Elizabeth’s husband Peter provided The View with a statement that said, in part, that they had agreed to a prenup while they were still dating, and accused her of misleading the court and putting all prenups on the line.

Petrakis said she felt her husband’s attorney wrote the statement, and she thinks the legal team is embarrassed to have lost their case after a lengthy court battle. She said that she never wanted to get divorced and did not marry for money.

Barbara Walters seemed very concerned about the implications of this case, but it remains to be seen how Petrakis’s case will affect other prenuptial agreements.