Dakota Fanning came by The View to talk about her new movie Night Moves. The View has been doing this neat thing where they ask a star to pose for a selfie and then people at home take pictures of themselves with their TV, so it looks like they’ve taken a selfie with the star. Dakota Fanning posed and looked very awkward while she did it. 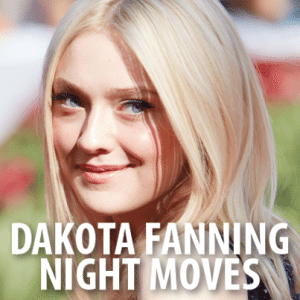 Dakota Fanning started in the film business when she was seven. Jenny McCarthy asked her how she stayed so sane and normal. Dakota Fanning said that’s a question she’s asked most frequently and it’s the hardest to answer. She said she has great parents and an amazing family. She also said the actors she’s worked with set a good example for her.

Dakota Fanning is attending NYU right now and trying to manage her film career at the same time. She said that when she was younger, she had to do three hours a day of school and that was scheduled out into the shooting schedule. But now, there’s nothing scheduled, so she has to find time to do the work.

Dakota Fanning has done 40 films in the course of her career. Whoopi Goldberg said she never watches her own films and wondered if Dakota Fanning watches hers. She said she’s seen pretty much all of them. When she was younger, it was fun. Now it’s not so fun.

Dakota Fanning stars in the new movie Night Moves, about three people who plan to blow up a local dam. Dakota Fanning plays a rich girl who decides to bankroll the operation. Dakota said she thought all three of them are doing this because they really believe in it. The movie is about the three characters and their relationship to each other.

The View: Dakota Fanning Feeling Dirty After A Role

Dakota Fanning recently said that three quarters of the way through a movie, she feels dirty. Dakota Fanning said that what she meant was that playing a character for so long makes her no longer feel like herself. “You’re kind of inhabiting another person and you’re almost thinking for that other person and so halfway through I just don’t feel like myself, because my routine is not for me, it’s for another character,” she said.

Then The View showed all of the selfies people took with Dakota Fanning and they were all hilarious. Particularly one, where a lady had taken a picture of herself and her cat with the TV. Jenny McCarthy said that Dakota Fanning’s selfies were the classiest ones yet.