18-year-old Austin Mahone came by The View to perform his song “Mmm Yeah” on the stage. As a performer, Austin Mahone has a really good presence on stage. He seems to have a knack for it that even people many years his senior seem to lack. And the song “Mmm Yeah” is ridiculously catchy. Even though this wasn’t my kind of music at all, I know this song will be stuck in my head for a long time. Jenny McCarthy said he reminded her of a young Donnie Wahlberg, who she’s engaged to. Austin Mahone said he had no idea who that was. 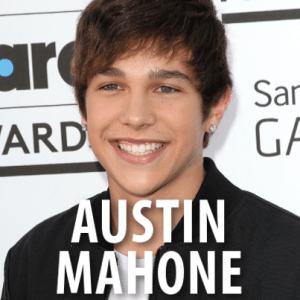 Austin Mahone started out by making videos on YouTube when he was 14-year-old of his songs in his bedroom. Now, he’s 18 and he gets to perform with Pitbull. He said that the whole thing happened really fast. His advice for people making music videos in their bedrooms was to stick with it. He said he would post four videos every week of the hottest songs that were on the radio at that time.

Austin Mahone is getting ready for his second headlining tour. He said he loves traveling to new cities and meet his fans. Jenny McCarthy asked him if he had a girlfriend and he said no. “Do you want a girlfriend?” Jenny McCarthy said.

Austin Mahone seemed shocked by this statement and was about to say something when Mona Scott interrupted him. “I feel like I need to protect you from yourself right now,” Mona Scott said, grabbing Jenny McCarthy and pulling her away from Austin Mahone.

As they’ve being doing recently, they had Austin Mahone pose for a selfie so that viewers could take selfies with their TVs and Austin Mahone and send them in. Among many awkward selfies, the cat lady returned!