The View: The West Memphis Three

In 1993, three 8-year-old boys were brutally murdered and sexually mutilated. The evil that had been done to these three boys was so horrific that the town of West Memphis, Arkansas believed Satan had descended on their town. They went on a witch hunt to catch the murderer and found Damien Echols, Jason Baldwin and Jessie Misskelley, who was borderline mentally disabled, all guilty of the murders.

The prosecutors on the case used the testimony given by Misskelley to charge the boys with the murder even though anyone can clearly hear the police feeding lines to Misskelley about the murder. Other people, out of fear and outrage, stepped up on the witness stand to testify against the boys.

In the end, Echols was charged with the death penalty three times and Misskelley and Baldwin were given life sentences.

Numerous celebrities from director Peter Jackson, musician Eddie Vedder and actor Johnny Depp, among others, spoke out against the media saying the boys were innocent.

Even after finding the DNA of a stepfather to one of the deceased boys in the ropes binding the boy, it didn’t turn the verdict around for the West Memphis Three. In 2011 they were able to enter Alford pleas, meaning they asserted their innocence while maintaining they knew the prosecutors had enough evidence to prosecute them. They were freed after 18 years.

Echols said the worst part about being let out was knowing the man who committed these crimes is still out there walking free. 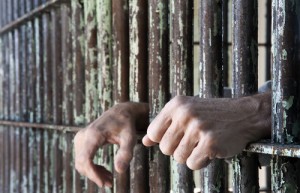 The View talked with West Memphis Three member Damien Echols about being freed from prison, what it was like to be in prison for 18 years and his marriage in jail.

The View: Damien Echols Speaks Out

The View invited Damien Echols on the show and said he was wearing glasses as he talked to the co-hosts because his eyes were so sensitive to sunlight. After being in solitary confinement for over a decade, his eyes had trouble adjusting. He said they only let you out of the cell an hour a day like in the movies.

When asked why they were targeted by the police, he said it was because they didn’t fit in. He was dubbed the ring leader by the media because Misskelley wasn’t frightening enough and Baldwin looked like a normal 16-year-old boy. So the media targeted Echols.

They were charged with the crimes by police who stated it was part of a Satanic act of violence and the boys were part of an occult, which Echols said was not true at all. But it was the only motive they had for the crimes.

The View said many different documentaries suggested that police forced Miskelley to make false allegations and Echols agreed. He said he was at home when the murders happened and Baldwin has photos and logbook signatures that can place him away from the murder when it happened.

The View also noted that Miskelley never testified against the other two boys. Echols said they weren’t friends. Miskelley didn’t testify because he knew it was the right thing, even when the police offered him a lighter sentence.

The View: The Trail of The West Memphis Three

Echols said he was in shock at the trial. His whole life had been thrown away before his eyes. As for the shot of him smiling as the police took him away, he said he was smiling at his family, to reassure them he would be alright. The media took it out of context.

Judge Jeannine Pirro was shocked that even with no DNA evidence against him and a person who refused to testify against him, the death penalty still stuck. Echols said someone needed to be charged. Each time they handed him another death sentence it was like being beaten to the ground. His mind couldn’t think straight.

He thanked the celebrities who stood up for him. It made him feel like he had a fighting chance. It gave him some hope. As for the families involved, he knew no one would listen to what they said. Everyone in the town was too swept up in their emotions and they wanted someone to be punished.