Lifetime’s new reality series, Preachers’ Daughters, follows three families of the cloth facing challenges at home. The Coleman family, Ken, Marie, and Taylor, were guests on The View to talk about finding themselves in the spotlight.

In a clip from the series, Ken confronted her daughter about going to a hotel with some boys. As punishment for her behavior, and I guess for lying, she had a curfew of “when the streetlights come on” and was not allowed to have boys call her anymore, even though she is about to turn 18. 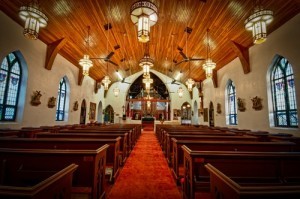 From the Lifetime reality show Preachers’ Daughters, Taylor Coleman and her parents talked about the scrutiny of being the teenage child of a minister.

The Coleman family from Illinois joined The View co-hosts to talk about the reality series. Why did they decide to open their lives to a reality show, and what did their church think about it?

Ken explained that he wanted to show everyone that preacher’s families have the same issues as everyone else. Barbara Walters said she was inclined to side with Taylor, who was too old for such childish punishments.

Taylor said that it is more difficult for the children of preachers, because their behavior is more scrutinized. Sherri Shepherd asked about Taylor’s aspirations to be an adult film actress, which she explained was a freeing feeling.

The daughter explained that her ultimate goal was freedom, and she could have chosen a better analogy. She might want to reconsider her career path, but she definitely seems well-spoken.

The View: Ken Coleman Past

Taylor’s behavior has included lying, wearing skimpy clothing, and spending time with boys. Ken admitted that he snapped when he found out what her daughter had been up to.

Their daughter said she felt her parents’ rules were too strict, and though she fell in line for awhile, the punishments did not work forever.

Barbara Walters turned into Dr Phil, dredging up some parts of Ken’s past, including getting two women pregnant at the same time. He said his former life was boring, and he found his calling in the church.

Wife and mother Marie finally got to speak, suggesting that she is trying to live vicariously through his daughter and help her avoid the mistakes he made. That puts her in the position of referee.

You can see the Colemans and two other families in Preachers’ Daughters, Tuesday nights on Lifetime.