As Emmy Rossum came out on stage to talk with The View, Sherri Shepherd said she looked like “a vision” and I have to agree. She looked stunning on the show today.

Anyways, The View wanted to know about her character on Shameless and how she got such a great role. Rossum said it was not easy. She had to audition four different times for the part, send in video auditions and she was still on the verge of not being considered, according to Rossum.

But, after some hard work, she was able to land the role of the oldest sibling in a dysfunctional household where William H. Macy plays the alcoholic father to five children of varying ages. 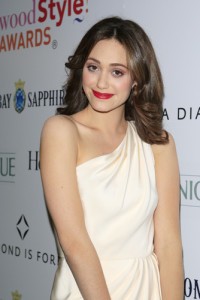 The View invited Emmy Rossum to talk about auditioning for her role on Shameless and she performed “These Foolish Things” from her Sentimental Journey album. (Joe Seer / Shutterstock.com)

The View: Emmy Rossum Phantom Of the Opera

Rossum said she was looking back at her previous time on The View and said she couldn’t believe how soft spoken and shy she seemed. “What happened to that girl,” she joked.

The View also brought up the last time she was on the show, when she was talking about her performance in The Phantom of the Opera, a role which garnered her a Golden Globe nomination for best actress, the youngest person to receive one.

She said it was a wonderful experience to go from Broadway to Shameless and said she loved working on the show. The best part for her was not having to go into hair and makeup, since her character on the show hardly wears any makeup.

The View wanted to know why, being such a young woman, Emmy Rossum was releasing an album with mostly older songs, some reaching back to songs her mother would sing to her when she was a child. She said the entire album is all songs from her childhood, songs she really likes to listen to and songs that defined her childhood.

“I am not in the club,” she said when The View wanted to know why she wasn’t doing hip hop music.

She performed the song “These Foolish Things,” a song she said her mother would sing to her when she was little. The song is also featured on her second album, Sentimental Journey. Her performance was mesmerizing  She has such a lovely voice. This is definitely not the kind of music you are going to hear on the radio anymore.