The View: Bellamy Young As Mellie On Scandal

In addition to the four other co-stars of Scandal that came on The View today, Jeff Perry and Bellamy Young were also there. Bellamy, who plays the President’s wife Mellie, said that she was stunned when she read the script that had Mellie going on national television to out the President for having an affair. She enjoys it all, though, because she never knows where the show’s writer is going to go with the story, and it excites her every time she gets a new script. 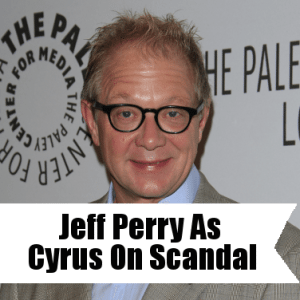 Jeff Perry, who plays Cyrus on Scandal, was just one of the show’s cast members to appear on The View. (image credit: Phil Stafford / Shutterstock.com)

Whoopi was honored to have played a part in Shonda Rhimes’ career because according to Whoopi, she is “magnificent.”

Sherri thinks that Jeff Perry must be the most stressed out human being on the set of Scandal. His…shall we call it impassioned…performance depicts Cyrus, the President’s chief of staff on the show, as an extremely in-your-face individual. He seems to always be yelling at someone.

Jeff Perry said that his performance comes from his experiences in small theater where stage managers were running all over the set trying to wrangle in the herd of actors. He thinks that this must be how his character feels on the show while dealing with affairs, impregnated interns and assassination attempts left and right.

To get perspective on his role and lend more realism to it, Jeff did speak to people who had been chiefs of staff in the past.

Mellie Is Holding Out Hope For Her & the President

On Scandal, Mellie has told the world of her husband’s affair, and yet nothing has changed. Whoopi wanted to know what this meant for her. Bellamy Young says she is holding out hope that they will get back together, but plans to raise their child just fine on her own if he doesn’t come around.