Roger Daltrey of Brit-rock band The Who came on The View. As one of the founding members of The Who, Roger Daltrey shared his most cherished moment of when the band was still growing, that being when drummer Keith Moon joined the band. “The maddest drummer in rock and roll,” said Roger Daltrey of the drummer. He says that within one minute of him trying out for the band, Keith Moon had gotten the part.

Wayne Brady, who was co-hosting today, wanted to know where Roger got all of his moves from to get the crowd going. Roger says that he would get quite bored just standing there on stage, and since he could out-Mick Jagger Mick Jagger, he had to come up with his own moves, which in this case meant swinging the microphone around like a musical morning star. What this usually meant was taking a beating when he tried to lasso the thing in before beginning to sing again.

The View: The Who Smashing Their Instruments 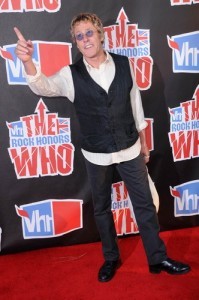 Roger Daltrey talked today about The Who, when they’re touring, and his charity foundation, Who Cares.

One of The Who’s trademarks was destroying the crap out of all their instruments, but this didn’t start when one of them decided to get a little too rock and roll—it started by accident. When the drummer accidentally broke one of his pieces of equipment, he got so mad that he just started breaking his drums. When the crowd went wild, the rest of the band members decided to follow suit and start smashing their own instruments. That’s pretty dang rock and roll.

The View: The Who Is Going On Tour In Britain

What’s next for The Who? Roger Daltrey said they are planning to start a tour in Britain, likely influenced by the massively successful tour in the United States last year.

With the tour schedule being so rigorous, it can be stressful on the body. Roger Daltrey learned this first hand when he started having problems with his voice (i.e. that thing you use to sing with when you’re the front man for a band), but he has bounced back. That’s thanks to a very good surgeon in Boston and living a lot like a monk, because you either do the parties or you do the singing, said Roger.

In addition to living like a monk to preserve his vocal chords, he also lives like a saint and does quite a lot of good with his “Who Cares” charity. The foundation has been around for over a decade and has helped build hospitals for teenagers with cancer.

Teens are unique emotionally from other age groups, but also where the cancer is concerned with many late-stage diagnoses, these specialized hospitals help treat them the most effectively.