The View: Rob Lowe Has the Flu

The View was a bit cautious to invite Rob Lowe on the set today because he has the flu and after learning all about it in a previous segment, none of the ladies on The View wanted it anywhere near them. But the show had to go on and they let Lowe sit on the couch with them. Luckily for them, Lowe said he has been taking Theraflu and has been symptom-free for five days.

The View invited Rob Lowe on the show primarily to talk with him about his new role in the Lifetime movie Prosecuting Casey Anthony. In the clip they showed, Rob Lowe was discussing the use of chloroform as the main murder weapon and he asked the other prosecutors to check the web searches on Anthony’s computer. They also debated whether first degree murder was the right thing to charge Anthony with.

The View, and everyone else in America, was deeply interested in the trial and, unlike the jurors in the case, almost everyone in America thought Casey Anthony was guilty. Rob Lowe is playing Jeff Ashton, the prosecuting attorney in the case, who lost to what The View called a beginner. Lowe said the defense attorney, Jose Baez, didn’t come from the same era as Ashton. He was willing to do whatever he had to win. “Ashton played a gentleman’s game and got beat by a street fighter,” Lowe said.

Lowe believed the state attorney overreached when they charged Anthony with first degree murder, a grave mistake on their part. But Lowe thinks Anthony was guilty of the crime no matter the verdict. He didn’t even want to talk about her on The View and said he “could care less about her.” As for Ashton, Lowe seemed to feel bad for the attorney. Ashton has been a prosecutor for 30 years and chose this trial as his last before he retired, thinking it would be an easy case, which is was not. But it wasn’t a complete loss for Ashton. He won the election for state prosecutor recently. 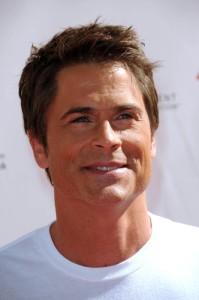 The View talked with Rob Lowe about his role in the film Prosecuting Casey Anthony, his views of our legal system and winning The $10,000 Pyramid grand prize. (s_bukley / Shutterstock.com)

The View: Rob Lowe On the American Legal System

Rob Lowe has some interesting ideas about the American legal system and said “our legal system has gone from the constitution stating you get a proper defense in a trial, to attorneys doing whatever it takes to get their clients off.”

Lowe said he chose to play the role because it was very “Shakespearian.” The prosecutors thought it was going to be an easy win with most of the nation backing their ideas surrounding the murder and it ended up not going the way they planned.

The View: Year Of the Viewer Tweets For Rob Lowe

With the Year of the Viewer in full swing, The View wanted let some viewers ask a few questions. The first question was from @Traceyhockeymom who tweeted “@theviewtv @roblowe #asktheview was the bathtub sex scene with Demi Moore In About Last Night awkward? Or fun? Tell us the story! Lol”

Lowe said it was fun to film the scene but added “with actors it is all about making the scene real and then the sex scene comes up and it is very artificial and all staged.” Sounds frustrating.

Another question came from @traceyguilliams who asked “#AskTheView @roblowe is there anything in your career you regret and why or why not?” Lowe said he does regret some parts he didn’t take when he had the chance but said he wouldn’t change a thing in his past because it could change where he ended up today.

Many people don’t know that Rob Lowe has been married to his wife Sheryl for over 20 years. But he admitted he wasn’t much of a romantic, at least not romantic enough to take out a life insurance policy. He said they have two children together. One is a freshman at Duke and this week is his rush week and his other son is a sophomore at a boarding school in California.

As for his advice for having a long, healthy marriage, Lowe said it is about finding the right person. “I married my best friend,” Lowe said. “And if you marry your best friend, you are golden.”

The View closed out their interview with Rob Lowe by checking out the video of him winning The $10,000 Pyramid when he was 15-years-old. Lowe said he took the $10,000 and donated it to the Cleveland Amory Fund for Animals.