TV mom Patricia Heaton from The Middle was on The View to talk about her advice on marriage and parenting. 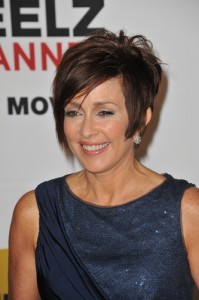 On The View, the ladies got Patricia Heaton marriage and parenting advice, as well as her thoughts on her sitcom “The Middle,” which is called underrated. (Jaguar PS / Shutterstock.com)

Patricia Heaton agreed that men are easy to please: “they like long hair…food, and affection,” she said. Let that be marriage advice for you.

The View: Patricia Heaton The Middle

Heaton has made a career as a TV mom, and she has just wrapped up another season of The Middle. During her summer break, she is moving into a new house and shooting a movie with her husband.

She is working on a Christmas movie for Hallmark, and she said she wonders why she keeps saying yes to projects all the time.

The View: The Middle Review

Heaton addressed the notion that The Middle is underrated. She loves the writing, but said the show has been ignored during awards season. However, she thinks that there is still time, since her previous series, Everybody Loves Raymond, was a slow starter.

Whoopi Goldberg said she loves the show and the lack of hype means audiences can be pleasantly surprised when they discover it. Goldberg said it reminded her of some of her co-hosts.

Heaton recalled an episode about setting her husband up on a play date with another dad so that he gets out of the house. She said that storyline resonated with wives.

At home in real life, Heaton said she reads her sons’ text messages to keep up with what is going on in their lives.

The View: The Middle Renewed?

Heaton, who grew up in the Midwest, is raising her family in Los Angeles. How does she keep them down to earth? The fact that her sitcom has yet to be renewed for another year is always a good threat, she said. (The decision on a fifth season of The Middle will be announced in mid-May.)

She also tries to remind them about how much things cost, and gets the change back from her kids when they have to take money to school.

“I constantly threaten them with insecurity about finances,” she said.

Heaton worked with Sherri Shepherd and guest host Jenny McCarthy on a comedy pilot that did not turn into a TV series.

These days, Heaton said everyone complains about her character’s hair. You can see Heaton in The Middle, Wednesday nights on ABC.