You may know Niecy Nash from her part as Raineesha Williams on Comedy Central’s Reno 911!, but despite that irreverent role, she does have a way to use her humor to give advice to married women. She does just that in her new book It’s Hard To Fight Naked.

Niecy Nash has been it all – the divorcee, the wife, the baby’s mother, the “side piece,” and she tried using these experiences to help her give women advice, some of which is apparently quite controversial. She doesn’t really care if you disagree, but she is also quite open to hearing different views on matters of the heart. 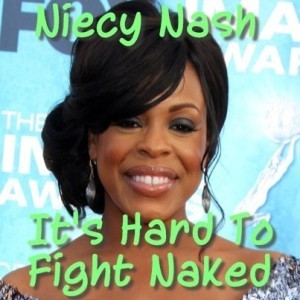 When asked what she thought the wildest piece of advice in her book was, Niecy Nash tried to stick to what she could actually say on television (some of it is quite edgy, according to her). She talks about a few tricks to keep that ideal man once you get him, but also gave some very unique advice as well.

“You attract what you are,” Niecy said.

If you are getting a bunch of crazy guys or girls, then Niecy suggests you get up in the morning, look in the mirror and go, “good morning, crazy!”

Does Time In the Bedroom Cure Everything?

Barbara wanted to know what Niecy Nash thought of the sentiment that a little time in the bedroom can cure everything. Niecy thinks that this can be the case with certain kinds of it, but not all of it.

For example, if Niecy feels an argument coming on, she takes her shirt off and puts lotion on her elbows. It calms everything down right away. Her husband, who was in the crowd, attested to this. That’s a new one.

Niecy Nash: The Two Times You Should Sleep With Your Partner

According to Niecy Nash, there are two times that you should sleep with your partner: If you feel like it and if you don’t. The second one doesn’t make a lot of sense, but that’s probably the carrot on the stick to get you to check out It’s Hard To Fight Naked.

Whoopi took a few seconds to request a book about how to sleep with your partner after menopause. Apparently, that’s going to be the followup.

Right before her segment ended, Niecy Nash announced that season two of her and Cedric the Entertainer’s TV Land sitcom, The Soul Man, is coming.