In the sneak peek, Walters asked One Direction what they do when girls throw themselves on the stage, whether Seth McFarlane heard voices when he was child and she asked Hilary Clinton if she is going to be running for president in 2016.

You are going to have to tune into tomorrow to find out who the number one and number two most fascinating people of 2012 are.

The View: Comics With Benefits

The View wanted to congratulate Joy Behar and Sherri Shepherd for their excellent job at Comics with Benefits, which raised over $75,000 for Hurricane Sandy victims.

Before The View brought out Martha Stewart, they wanted everyone in the audience to look their best. They gave the audience Bulova Watches, the prefect gift for any business woman or business man in your life. 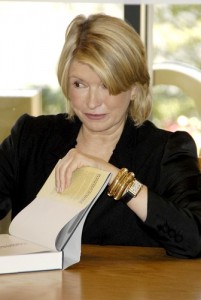 Martha Stewart showed The View how to repurpose wood and trees. (s_bukley / Shutterstock.com)

The View wanted to do a few crafts with Martha Stewart and what better time of year for crafts than Christmas. The time between Thanksgiving and Christmas should probably just be named Stewart’s month anyway. Look at the amount of gifts, crafts and other holiday fun Martha Stewart comes up with every year.

She said the best way to hang the wreath are with some Command Hooks.

Next , Martha wanted to spruce up a mailbox. She simply took an ordinary mailbox, taped off a design, painted on a primer followed by regular red paint and finally some glitter paint. After everything dried, Stewart said to simply peel off the tape and you have a festive mailbox.

And mailbox smashers beware. Martha Stewart will find you if you break her mailbox.

Hurricane Sandy tore down over 100 trees on Stewart’s property but she wasn’t going to let them go to waste. She said you can take some small tree stumps and cover them with a white cloth or cotton balls with some glitter. It will make them look festive. She also recommended using a paddle drill to drill a small hole half way into the stumps and placing candles inside the hole.

Check out all of Martha Stewarts decorating tips below and get to work on some holiday crafts.