Kevin McKidd stars as embattled chief of surgery Dr Owen Hunt on Grey’s Anatomy. In a clip from an upcoming episode, Dr Hunt deals with blowback from a colleague since the hospital has been forced to close its ER due to financial problems. Check out what he had to say about directing the show and what’s on his iPod. (For more from this show, check out Hunter Hayes and a Peruvian adoption story.) 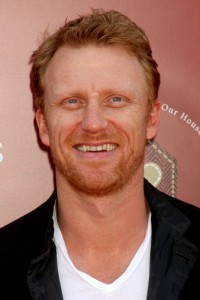 Sherri Shepherd wanted to dish about the primetime medical soap and the story arc of a plane crash and multimillion dollar settlement. Can he give any clues about what’s ahead? In his Scottish brogue, he pointed out that the characters on the show bankrupted their own hospital.

He said his character feels responsible. Guest host Kris Jenner just kind of watched the interview go on. Do you think she watches shows that don’t feature her family members?

Elisabeth Hasselbeck wondered about Kevin’s character’s relationship with his ex-wife, Cristina. The impasse between them has to do with their disagreement about becoming parents. But Kevin said he loves working with co-star Sandra Oh and is curious to see where the story goes.

Kris Jenner jumped in to ask how McKidd deals with online fan reaction, making me further question her ability to distinguish between reality and fiction. In real life, Kevin McKidd is not married to Sandra Oh; his real life wife is named Jane Parker.

In addition to acting, Kevin has now directed six episodes of Grey’s Anatomy and has become confident in that dual role. Joy said she preferred Kevin’s Scottish accent to the American one his character has.

Kevin admitted that he starts to slip by the end of a 14-hour shooting day on the set. He also revealed that he was offered a role in the Harry Potter films but had to turn it down because of his scheduling commitments.

On Kevin’s iPod, you’ll find a mix of everything from Foo Fighters to jazz and Led Zeppelin. But there are also some Scottish bagpipe tracks.

You can watch the drama unfold at Seattle Grace in Grey’s Anatomy, Thursday nights on ABC.