Jason Mraz stopped by The View to do a performance from his new album Love is a Four Letter Word, but not before talking about how he got to where he is now.

The View wanted to know what he though about his song “I’m Yours,” a song that was on the Billboard music charts for 76 weeks, the longest any song has ever been on the charts. He said he still likes hearing the song on the radio and the song opened his eyes as a songwriter to the power of a song.

Mraz performed on The View in 2003, when he had short hair and didn’t don his classic fedora. The View wanted to know what changed since then, including why his hair was so much longer.

He said he was surprised his hair is such a hot topic right now but said he likes to wear the hat because his albums sell better when he wears it. I guess people really like the hat. I’m not too crazy about the fedora, but it looks good on Mraz. 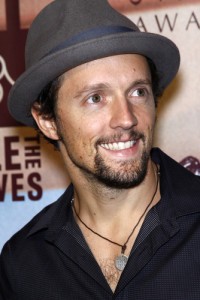 Although some of his past albums and songs were about breakups, Mraz said his new album is about the healing process that takes places after the breakup.

As for the breakup itself , Jason Mraz seemed a bit annoyed when The View wanted to know some of his more personal secrets. He simply said he sings about the things that are personal to him. He puts it all in his music.

He did reveal that many of his muses are not past girlfriends, but rather past musicians like Bob Dylan and Van Morrison.

According to Mraz, he wrote about 80 songs for his new 12 song album. He said he may release all of his songs one day in a huge box set for fans.

Either way, everyone got to hear an excellent version of his new song “93 Million Miles.” You can see the performance in the video below.