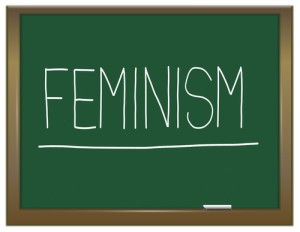 The View welcomed feminist icon Gloria Steinem to talk about the new PBS documentary Makers: Women Who Make America and the future of feminism.

In a clip from the PBS documentary, Steinem’s creation of Ms. magazine was shown as an honest outlet for the true lives of women. How does she feel about being one of the most recognizable names and faces of the feminist movement?

“It is a movement. It is for millions of people, and…I’m recognizable as part of it,” she said. “But it’s very clear to me that it’s about the whole thing.”

Steinem said she does not believe that every movement needs a leader. Behar thinks of Steinem as a role model, who inspired her throughout life. But who inspired Steinem along the way?

“Growing up, there was just Louisa May Alcott and Eleanor Roosevelt,” she said.

Brooke Shields said she thought Steinem was the catalyst for the modern feminist movement, but Steinem said it is learned and passed down from the life and work of others. It is about telling the truth and learning that “if disparate people are having the same experience, it’s probably political and unjust.”

The PBS documentary Makers: Women Who Make America covers aspects of women in life, touching on everything from race to the Boston Marathon. But Elisabeth Hasselbeck wondered what else is still to be done in the women’s movement.

Steinem said that there is no one answer for everyone, but history shows that this is probably a halfway point. “Now we’re striving for legal and social equality,” she said. Social systems divide populations and create barriers by instilling a hierarchy.

But Steinem said, “we are really a circle, and we are linked. We are not ranked.”

The word “feminist” has become demonized, according to Steinem. But Brooke Shields wondered what can be done to make that word safe. Steinem said that “58% of young women, 54% of older women and 30% of guys self-identified as feminists.”

Elisabeth Hasselbeck and Steinem agreed that 17% of Republican women consider themselves feminists, which Hasselbeck said is sometimes glossed over.

The View: Feminists, Lesbians and Race

Has feminism finally broken down the barriers surrounding gay and lesbian women, and the racial divides that have fractured the fight for equality in the past?

Steinem said that a poll from the early 1970s found that African American women were twice as supportive of feminist interests than the average. Obviously, there is a lot more to the story of women’s equality than The View had time to cover in a quick interview.

But you can see more about Gloria Steinem and other influential women in Makers: Women Who Make America, airing February 26 2013 on PBS.