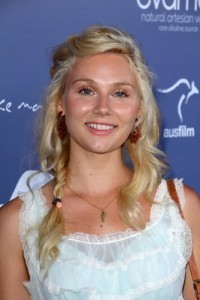 Nashville’s Clare Bowen told The View about her role on the show. (s_bukley / Shutterstock.com)

Clare Bowen stars as Scarlett O’Connor, a waitress hoping to making it big in country music, on Nashville. She talked to The View about the show and her appearance on the Grand Ole Opry.

Scarlett O’Connor moved to Nashville with her boyfriend so that he could pursue a career in music. She works at a small diner and is a sweet Southern girl. Unfortunately for her boyfriend, Scarlett is discovered by a legendary country music producer and signed to a music writing deal. This leads to many problems for the couple.

Bowen is actually Australian, but she said that her Australian accent helped her with the Southern accent. On The View, Bowen was soft spoken and seemed to float in her seat. She even dressed like a Southern Belle, wearing a white and pink frilly dress with fringe boots and a big hair piece.

The View: The Grand Ole Opry

Clare Bowen was trained classically in opera at a young age. She said that she was trained in a strict performance mindset, but Whoopi’s movie The Color Purple inspired her to pursue other types of music. In a small star-struck moment, Bowen gushed over Whoopi’s movie and said that it taught her you don’t have to be perfect while singing.

Clare Bowen was invited to sing on the Grand Ole Opry stage with Vince Gill. She never thought she would get to do something like that and jumped at the chance. The thing that awed her the most was standing on the stage where so many before her had performed.

You can catch Nashville on Wednesday nights at 10 p.m. on ABC.