The View: Bob Saget That’s Why I’m Talkin’ About Review

Bob Saget, the raunchy funny man and former cast member on Full House came on The View May 10 2013 to talk about his new cable special That’s What I’m Talkin’ About. So how did the guy go from being the wholesome Danny Tanner on Full House to making crude jokes, and then never growing out of it?

“I have an immature sense of humor,” said Bob Saget of his off-color stand-up that he has been refining over the last 30 years. “There’s so much stuff that’s said in the world, so instead of going with politics or religion, I keep it safe…around my crotch.”

So what makes him think he has to be so risque on his stand up acts? It’s not so much that Bob needs to make so many jokes that wouldn’t be out of place on your average middle-school playground, it’s just that it’s so fun! 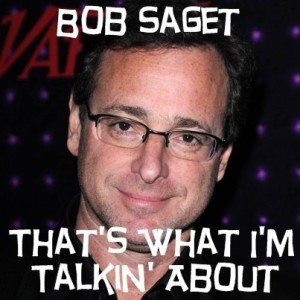 Bob Saget talked about his off-color humor and being in bed with John Stamos. (image credit: s_bukley / Shutterstock.com)

Danny Tanner, the character Bob Saget played on Full House, is quite a bit different than the bathroom-humor-slinging funny man that Bob becomes on stage. Imagine watching an episode of Full House and then deciding to take your kid to the show thinking, “this guy is so wholesome!” Yeah…there’s a little more at work here.

Bob told the story of a serviceman that he talked to recently who, after seeing Danny Tanner’s golly-gee mannerisms on Full House, decided to sit down with his kid while he was on leave and watch one of Bob’s stand up specials. Needless to say, it wasn’t long before they were back to watching the family-friendly sitcom.

Bob Saget has three daughters (that he knows about), and Steve Schirripa, who has daughters of his own, wondered what prom season was like for him. Well, his daughter went in a limo with friends and Bob was particularly happy to hear that one of them vomited on the ride there because it made the guys want them less. His other daughter, who was a little more crafty, sneaked off to a club, while Bob thought she was elsewhere.

His daughters have also watched all of his stand-up performances, and always get enjoyment out of them. They must be over 17.

While Bob Saget can sometimes make jokes that leave you feeling in need of a shower, there are topics that he won’t touch on. He doesn’t particularly care for cruelty in his jokes, and falls closer to the silly and the light-hearted than the darker colors of some of his comic contemporaries.

Bob Saget was actually supposed to be a doctor at one point, but opted for comedy instead. He wouldn’t give a clear answer as to why, but he did make a crack about laughter being the best medicine (cue rim shot).

How Bob Saget Ended Up In Bed With John Stamos

Bob Saget and John Stamos, over the years of playing on Full House together, became quite close. So close, actually, that the two…wound up in bed together in Las Vegas?

It all started with an Elvis impersonator, was followed by a few drinks and ended with John feeding Bob steak in bed after he had helped him in there. Bob says he doesn’t remember much, so he couldn’t really say if John was a gentleman while they were in bed together. Apparently, not everything that happens in Vegas stays in Ve…never mind – that’s too easy.