The always offbeat and sometimes troubled comedian and actor Andy Dick, now a cast member on Dancing With The Stars, was a guest on The View. How is he doing these days, after all his troubles with rehab and the law? Plus, the ladies met his dance partner, Sharna Burgess.

The View: Andy Dick Dancing With The Stars 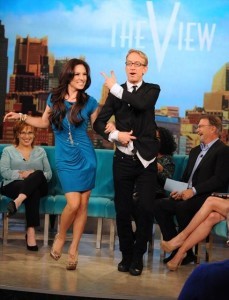 The View welcomed comedian Andy Dick and his professional partner Sharna Burgess, who are competing this spring on a new season of Dancing With The Stars. (ABC/Donna Svennevik)

Sherri Shepherd read the headlines describing him as a risky choice and “notorious cokehead.” She wanted to know what he thinks about the reaction to his casting.

Andy Dick said that it is true that he has a checkered past, but “now I’m doing great.”

He was approached in the past to be on the show, but he passed because he was not in a good place in his life. In December 2011, Dick performed tap dancing on The View, which may have helped him get the gig.

Sharna Burgess, Andy’s professional dance partner on the show, is helping to choreograph their routines. She said that Andy has had to overcome his fears as he prepared to hit the dance floor.

Andy suggested that Dorothy Hamill is a ringer, “because she basically danced on ice and won gold medals.”

The View: Less Than Perfect Cast

Did you know that Andy Dick has three children and a few stepchildren. They are all very excited about his new gig on the reality competition.

Sherri Shepherd said she and her Less Than Perfect castmates are reuniting to root him on in the audience as well.

Andy and Sharna practiced a few quick dance moves to end the interview. Dancing With The Stars is on Monday and Tuesday nights on ABC, premiering March 18 2013.