The View welcomed Alicia Keys on the show today. And did anyone else see what she was wearing today? I don’t think I was a fan. What did you think?

Anyways, Whoopi Goldberg recently emceed a benefit concert for Alicia Keys’ Keep a Child Alive Foundation, which raised $2.2 million. The View wanted to congratulate her on that and for raising money during her performance at the 12/12/12 benefit concert for Hurricane Sandy relief.

She said it was bitter sweet being there. She was amazed she was performing last, after such big names as Eric Clapton and the Rolling Stones, but she said it was also sad that so many people lost their homes due to the super storm. Keys even lost a lot of her musical equipment. “All my music equipment was under six feet of water,” Keys said. “But it was nowhere near as bad as losing a home like so many other people did.” 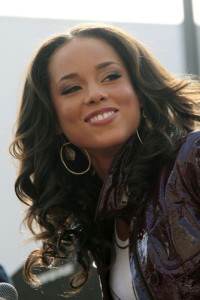 Alicia Keys performed “Brand New Me” on The View.

The View: Alicia Keys Became a “Lioness” After Pregnancy

Alicia Keys, who is married to Swizz Beatz and has a child named Egypt with him, said her baby boy changed everything in her life, from her music to the way she lives her life. She said the birth of her child made her ready to step into womanhood and make choices she never thought she would know how to make. “It made me into a lioness,” Keys said.

And her little boy has made her into a better singer as well. Keys said she sings to him all the time. He likes her song “Not Even the King” and he likes to sing back to her as well, singing a song out of the book Love You Forever.

“I am going on tour next March and I am bringing him with me,” Keys said. “I couldn’t breathe without him around”

Girl On Fire, Keys’ latest album which has been called her masterpiece by critics and fans alike, has a lot of collaborations, more than Keys has ever had before. She said she finally felt free enough to have other people collaborate with her. She said she found the strength to be a woman and she feels empowered by other people.

Alicia Keys said she got the name for her album from an article she read about herself. In the article, the author called Keys a “woman on fire” and the moment she read it, she knew she had to write a song about it.

Alicia Keys chopped off all her hair in a hairstyle she calls the big chop. She said it was symbolic of being free, beginning fresh and letting go of her intense energy. She wasn’t scared to chop it all off – she felt good about it.

Alicia Keys performed “Brand New Me,” off her new album Girl On Fire, a moving rendition as she played piano and sang.