Home > The View > The View Advice
When you buy through our links, we may earn an affiliate commission. As an Amazon Associate we earn from qualifying purchases. Learn more.

Do you believe in positive reinforcement for children? Legendary coach Bob Knight does not, and he outlined his feelings on this in a new book, The Power of Negative Thinking. He took a seat at The View table to share his perspective.

Bob Knight, one of the most successful coaches in basketball, said that negative thinking is responsible for a lot of his successes. 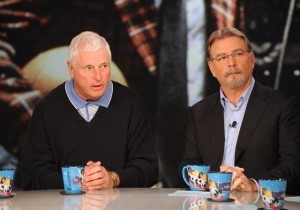 The View talked to Coach Bob Knight about his new book, The Power of Negative Thinking, which outlines his unconventional coaching strategies for success. (ABC/Donna Svennevik)

Knight explained that some of the positive mantras we tell ourselves are not really helpful. There is no longer any point in losing, when every child gets a trophy just for participating.

The View: Value of Losing

According to the coach, losing is important because it can teach you about how you got there. Whatever the reason was in a game, you can improve in those areas and correct your mistakes.

If you focus on the score and don’t make corrections, you set yourself up for future losses as well.

Guest host Bill Engvall said that he coached his son’s tee-ball team. He said that even if parents tell kids they are playing for fun, the kids know what’s going on and they can keep score.

Bobby Knight also does not believe in the concept of hope. He thinks that there are other more practical concepts that are valuable.

Knight recalled seeing a runner cross home plate and thank God for helping him hit a home run. All he could think about was that God must have “screwed the pitcher.” His point was that divine intervention does not factor in when it comes to sports.

What about his hothead reputation on the basketball court? He made no apologies for his take no prisoners style. A whopping 98% of Knight’s players graduated from college, many with honors.

Knight explained that he felt a responsibility to the parents of his players to help them succeed in life. He was motivated for them to have opportunities, beyond just the NBA. He was in contact with all his players’ professors to track their attendance and grades.

If his players skipped class, they would have to run the stadium bleachers for two and a half hours. “I never had to run a kid twice,” he said.

He said that you can find the strengths in any player, even if he or she does not seem to be the most well-rounded player. You can get more of his advice in Knight’s new book, The Power of Negative Thinking.