Home > The View > The View Advice
When you buy through our links, we may earn an affiliate commission. As an Amazon Associate we earn from qualifying purchases. Learn more.

The View: Barbara Walters Learns to Make An Omelet

Chef Rocco DiSpirito helped Barbara Walters make an omelet the right way. He said there really is a right way and a wrong way to make an omelet. Every person likes their own omelet techniques, but this way gets you a fluffy omelet that really looks delicious. 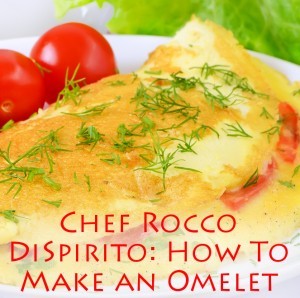 The View brought Chef Rocco DiSpirito to teach Barbara Walters how to make an omelet the right way. The trick is in the shake and stir to get a fluffy egg.

Chef Rocco Dispirito: How To Make an Omelet

The first thing is cracking the eggs and shaking the bowl while you whisk the eggs together. Chef Rocco favors the one-handed crack. It’s all about shake and stir, said DiSprito. He poured the eggs into a screaming hot pan and then shook the pan while stirring again.

You don’t want to scramble these eggs, but you want then stirred up in the pan because it definitely makes it fluffier. Then, you let the egg sit in the pan and add the toppings you want. Barbara added onion, cheese, peppers, and spinach, along with more mystery additions.

The finishing touch to Chef Rocco DiSpirito’s omelet is to roll it out of the pan. One hand grips the panhandle like a dagger, while the other holds the plate. You tip the pan over the plate. The omelet will roll and slide down the pan onto the plate.

Chef DiSpirito said that making an omelet correctly (aka this method) is how you separate real chefs from the amateurs. He’s used the omelet test to narrow down candidates for jobs.

After tasting the two omelets that Barbara Walters and Rocco DiSpirito made, Barbara made her own omelet in the method she uses at home. It didn’t look bad, but she took a lot of flack when she forgot to add toppings to the omelet and it wasn’t as fluffy as Chef Rocco’s method. Everyone agreed that the DiSpirito omelet was much better.