Sara Gilbert grew up with Seth Green, whose memorable roles have included Austin Powers and Buffy The Vampire Slayer. Now he stars in the new movies Sexy Evil Genius and The Story Of Luke, which he discussed on The Talk. 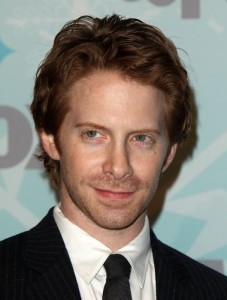 Seth Green talked about his new movies, Sexy Evil Genius and The Story Of Luke, on The Talk April 1. (DFree / Shutterstock.com)

In the film Sexy Evil Genius, a woman invites all of her exes to the same bar on the same night. The action unfolds in real time, and Green explained that his character loosens up over the course of the movie as the drinking continues.

Sexy Evil Genius is available on DVD and on demand starting April 9 2013.

He admitted that he got drunk between takes with co-star Harold Perrineau. Green and The Talk host Sara Gilbert have been friends for a long time, and they had each other to lean on as they navigated teenage fame together.

Green used to wait for Sara to escape from her house in his huge Ford truck. He said that years ago, the traffic situation was different, and it was easier to get around.

The actor also admitted helping himself to a hotel bell on one occasion, which he put on his dashboard. It would ding when he changed lanes suddenly.

Seth Green is married to Claire, and he said they were great friends before they started dating. They enjoy one another’s company and “come from a similar perspective.”

He said that it’s important for couples to share one another’s interests to build a lasting relationship.

The Talk: The Story Of Luke Review

Green also stars in the upcoming movie The Story Of Luke. This is the story of an autistic character who does not know about his condition until his longtime caretaker dies.

He said that his character is also on the autism spectrum and the two clash when they meet one another.

The Story Of Luke is in theaters and on demand starting Friday, April 5 2013.