Former sitcom star Ricky Schroder has pursued more dramatic work as an adult, and he joined The Talk’s panel with guest co-host Arsenio Hall to talk about his latest project, Our Wild Hearts.

The Champ, Ricky’s first ever movie, won him a Golden Globe as a child actor. Sara Gilbert loved his heartbreaking performance and wondered how he tapped into those emotions. 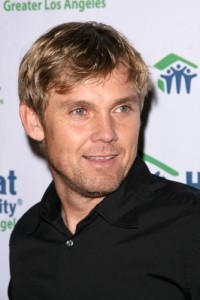 From the new Hallmark Movie Channel film Our Wild Hearts, actor Ricky Schroder was on The Talk to discuss working with his teenage daughter and his career. (s_bukley / Shutterstock.com)

Schroder joked that his career has been downhill since age 7. “I was able to suspend reality and actually believe that John was dying,” he said, admitting that he has no formal acting training.

Ricky was recently roasted by the Friars Club in New York City, and he got the chance to reunite with his Silver Spoons co-stars, Erin Gray and Joel Higgins. He said he would be open to an official reunion, though he is not sure what the story would be.

He has gotten over the struggles of being a child actor and is now working with his own offspring in the business. Schroder said that he got the chance to kiss Whitney Houston when they were both teenagers.

What’s the best advice Ricky ever got? He met his acting hero, John Wayne, in 1979. His advice was that it is more important for people to like you than for critics to like you.

Schroder also got some career advice from Michael Jackson years ago. “I’ve stayed inspired. You must continually look for inspiration, to last,” Jackson said of his longevity.

Ricky’s teenage daughter Cambrie has always wanted to pursue acting, and he wanted to help her create her first role and make it a memorable experience. They got the whole family involved in the new TV movie Our Wild Hearts. Ricky co-wrote the script with his wife, and the couple’s four children all have roles in the story.

Cambrie was in The Talk audience, and she said that one of the fight scenes was not coming off as natural. She had to actually punch her brother for real to get the perfect take in that scene.

Our Wild Hearts is on the Hallmark Movie Channel, premiering Saturday, March 9 2013.

The Talk co-hosts challenged Rick Schroder to a ranch-themed game. His goals were to lasso two longhorn steer heads and mount a horse to lasso a calf within 90 seconds. If he completed the task, the audience would win a $100 credit from 1800Flowers.

International Women’s Day is March 8 2013, and there are special bouquets available for the occasion from 1800Flowers.

As for Ricky’s ranch skills, he did not quite have the lasso mastered. His form was good, but he could not get the job done. He did a little better mounting the horse, and with some cheating from Sharon Osbourne, he completed the challenges.