From Nurse Jackie and the Twilight movies, father and family man Peter Facinelli was a guest on The Talk. Find out what his sisters taught him and why he loves his father. 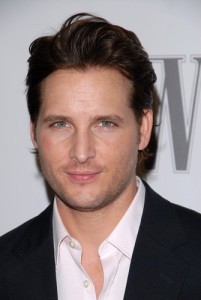 From Nurse Jackie, Peter Facinelli talked about what he learned growing up with three sisters and how that prepared him to raise three daughters of his own. (s_bukley / Shutterstock.com)

Peter Facinelli said he is afraid of needles, but he would get a tattoo for work if the price was right. Sara Gilbert said she had a few tattoos from her teenage years, but they are not anywhere noticeable.

Facinelli said he would be more inclined to a Henna tattoo, in case he changed his mind later on. Would you get a tattoo of your company logo to get a raise?

Facinelli grew up with three sisters, and now he has three daughters. This guy has been around a lot of women his entire life.

“I love women. I have so much respect for them,” he said. “I learn so much from them, just being sensitive and compassionate.”

But he did admit he had a hard time getting into the family’s single bathroom when he was growing up.

Facinelli’s parents emigrated to the US as teenagers, and he thinks of his father as mischievous and funny. He used to be embarrassed of his dad’s accent and antics, but now he has nothing but love for the man. Among his talents are practical jokes and playing the accordion.

He said that his parents did not know American celebrities when their son was coming up in the business, so he could never impress them by name dropping his co-stars.

Recently, Peter took his three daughters on a safari vacation in Arizona.

Peter Facinelli’s Nurse Jackie character, Dr Cooper, has a form of Tourette’s syndrome, which causes him to inappropriately touch his co-workers when he is nervous.

He said that doing that on the set with his co-stars can be awkward. You can see the end result in Showtime’s Nurse Jackie, airing Sunday nights.