Morgan Freeman has played every character you can imagine, from presidents to gunfighters and even God. His latest role has him taking charge of a White House under attack. Freeman was a guest on The Talk to discuss his work in Olympus Has Fallen. He also hosts the Science Channel series Through The Wormhole.

Morgan Freeman has an instantly recognizable voice, and he told the hosts of The Talk about someone who is using an imitator in their commercials. “They pay me to let him sound like me,” he said of a British company. Where do I sign up for that kind of deal? 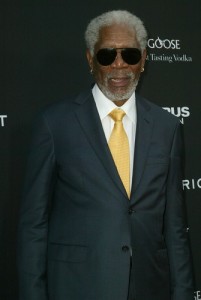 Morgan Freeman was on The Talk to promote Olympus Has Fallen, his Science Channel show Through The Wormhole, and stories spanning his entire career. (CarlaVanWagoner / Shutterstock.com)

Though Freeman has been acting for decades, it was not until recently that he filmed his first love scene, opposite Virginia Madsen in The Magic of Belle Isle. Madsen went off script and surprised everyone by improvising a more romantic moment between the characters.

“It changed the tenor of the entire movie,” he said of the chance incident. Director Rob Reiner was pleased, according to Freeman.

The Talk: Olympus Has Fallen Review

Freeman said his latest movie has been compared to “Die Hard at the White House.” Gerard Butler stars as a Secret Service agent, and the country is under attack from North Korean terrorists.

Morgan Freeman stars as the Speaker of the House, who becomes acting president when the president and vice president are both kidnapped. This is less of a tough guy role for the actor.

As for Butler’s performance, “I think he holds his own very well,” Freeman said of his co-star.

Olympus Has Fallen is now in theaters.

Robert De Niro, Michael Douglas and Kevin Kline are starring with Freeman in the 2013 movie Last Vegas. The four Oscar winners are working together for the first time, and Mary Steenburgen is also in the cast as the film’s leading lady.

“That was a total blast, I’ve got to tell you. I’m still starstruck,” he said of the experience filming Last Vegas.

Though he has known his co-stars for years, they all had the chance to work together for the very first time. Julie Chen compared it to a Hangover-style movie for an older generation.

Freeman also appears in the Science Channel series Through The Wormhole. The show delves into scientific mysteries and talks to those who are exploring the answers. He said that life after death has been a fascinating topic on the show.

“They can see in the future where you don’t even have to die,” he said. Humans could eventually travel into deep space, as well. Ion drive will be the key to making that a success. That sounds like quite a learning experience.

Freeman has said he will never write an autobiography. But since he has so many great stories, The Talk co-hosts wanted to ask the acting legend to free associate based on some of his career highlights.

Street Smart – Freeman overheard actors auditioning before him, and he toned down his performance as a result. It worked, and he got an Oscar nomination.

Driving Miss Daisy – Co-star Jessica Tandy followed a progression similar to her character over the course of filming. It sounds like she was doing Method acting.

Glory – Morgan said this is his favorite movie that he has worked on.

Unforgiven – Freeman met Clint Eastwood for the first time on the set, but their working relationship was like they’d known one another forever.

The Shawshank Redemption – He recalled that the film’s early reception was not great, because the name was a mouthful. Now we think of it as a classic.

The Dark Knight Trilogy – Freeman worked with Christian Bale in the latest Batman series. He enjoyed being part of a well-known franchise.

The Bucket List – Freeman teamed with Jack Nicholson for The Bucket List, directed by Rob Reiner. It was the perfect combination.

Invictus – Nelson Mandela said that he wanted Freeman to play him in a movie version of his book, which has got to be flattering and humbling.

What is your favorite Morgan Freeman movie? Tell us in the comments.